Cookie preferences
This website uses cookies, which are necessary for the technical operation of the website and are always set. Other cookies, which increase the comfort when using this website, are used for direct advertising or to facilitate interaction with other websites and social networks, are only set with your consent.
Configuration
Technically required
These cookies are necessary for the basic functions of the shop.
"Allow all cookies" cookie
"Decline all cookies" cookie
CSRF token
Cookie preferences
Currency change
Customer-specific caching
Individual prices
Popups
Selected shop
Session
Comfort functions
These cookies are used to make the shopping experience even more appealing, for example for the recognition of the visitor.
Note
Statistics & Tracking
Affiliate program
Track device being used
EN
Categories
Information 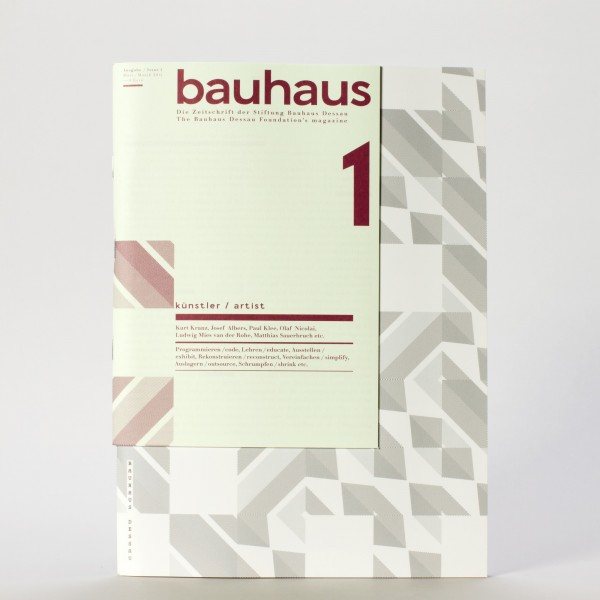 After 80 years back in circulation: Bauhaus - the new magazine of the Bauhaus Dessau Foundation. News from the Bauhaus world, essays, interviews and more.
When the Bauhaus building in Dessau was opened in December 1926, the Bauhaus magazine was published for the first time. Quarterly issues reported on events in Dessau and important trends of modernity. The articles were signed by names such as Walter Gropius, László Moholy-Nagy, Paul Klee, Wassily Kandinsky and Marcel Breuer – compelling spirits who championed their positions here. The last issue of the magazine was published in 1931. 80 years later, the Bauhaus Dessau Foundation publishes a new magazine under the old name. It's not about reviving a broken tradition and assuming its continuation, but to report from the present of an institution which is still active today at the Bauhaus building in Dessau, where the historical experiment Bauhaus took place.
Published bi-annually, the new Bauhaus magazine will take a look at the developments between historical heritage, current advancements and lively intellectual environments. The main subject of the first issue is the role of the artist - during and after the Bauhaus. With contributions by Olaf Nicolai, Philipp Oswalt, Matthias Sauerbruch, Christina Tilmann et al.

{"delay":0}
This website uses cookies, which are necessary for the technical operation of the website and are always set. Other cookies, which increase the usability of this website, serve for direct advertising or simplify interaction with other websites and social networks, will only be used with your consent. More information
Decline Configure